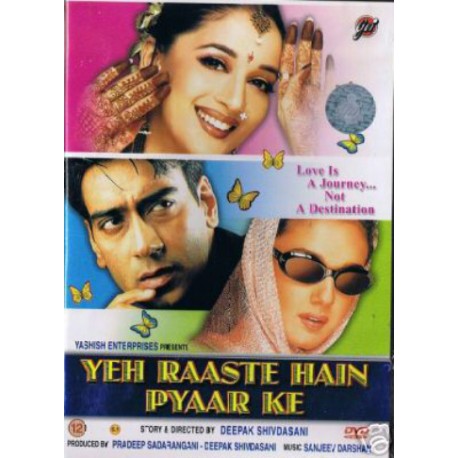 Love is a journey... not a destination! YEH RAASTE HAIN PYAAR KE, directed by Deepak Shivdasani, is a love triangle that stars Ajay Devgan, Madhuri Dixit and Preity Zinta in lead roles. It tells the story of Vicky (Ajay Devgan), a thief, con man, habitual gambler, who believes that the colour of money will change his dreams. He had no emotions in life, but his life changed dramatically one day. It tells the story of Neha (Madhuri Dixit), a naive, beautiful, innocent married girl. She knew only one destination of life -- love for her husband. But things became different one day. It tells the story of Saakshi (Preity Zinta), who is a true friend, but impulsive by nature, lethal in her relationship with the man she loves. She believed, her love for her man was not only a journey, but the ultimate destination. YEH RAASTE HAIN PYAAR KE also features Sunny Deol in a special appearance. The film has three music directors in all -- Sanjeev-Darshan and Adnan Sami. The Sanjeev-Darshan - lyricist Anand Bakshi combo has tuned six songs, while the current rage, Adnan Sami and lyricist Mehboob have composed the balance two tracks.