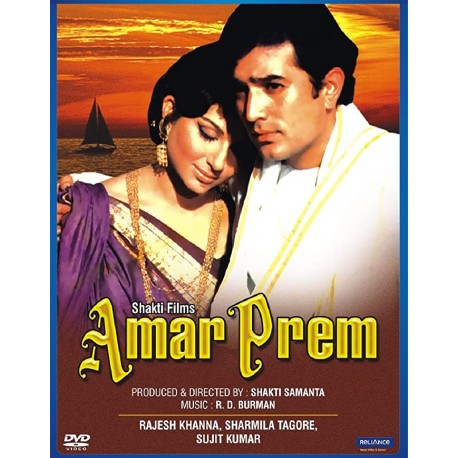 The treatment of Amar Prems story and characters may not be entirely grounded in reality but the film's emotional appeal is undeniable. It probably lies in the in-built romanticism of the story and the heart-in-your-throat evocation of the supreme selflessness of lovers. Amar Perm contends that true emotional fulfillment need not necessarily lie in a fructified relationship which ends with a marriage and the average two kids; it can also be found in a nameless bond between a man and a woman that transcends convention. Bruised village belle Pushpa (Sharmila Tagore) is returning home after having been abandoned by her philandering husband (Manmohan) for a younger woman. Pushpa makes a valiant bid to start life afresh but the village youth openly make passes at her while the women treat her with contempt. She tries to drown herself in the village pond but is saved by the notorious Nepali babu (Madan Puri). Romance, spurred by their shared feeling of abandonment, quietly embraces the two lonely souls. Honoring his family's wishes, Pushpa snaps off her relationship with Anand. Soon, Nandu too shifts with his family to another city. Years go by. Pushpa is now a graying, bent and constantly-abused dishwasher at a lowly restaurant. The film climaxes with a series of events vindicating Pushpa's struggle, sorrows and sacrifices. Pushpa's now-blinded husband dies in her arms. Anand babu, who has left 'wine, women and wife', returns to her life and orchestrates a meeting between Pushpa and Nandu, now a well-to-do engineer (Vinod Mehra). Nandu takes Pushpa home, symbolically, on the day when other people are taking Durga Ma's idols home. In a scene that showcases the filmmaker's sensitivity, Anand Babu suggests a boat ride to Pushpa when he senses her agitation at her mother's death. He assuages her with Bakshi's rare beauty Chingari koi bhadke, while she rests her head on his shoulders. The film is unabashedly sentimental yet retains its poignancy. Pushpa has no legal or societal claim on either Anand or Nandu. Her predicament is captured in Anand's line, "Nandu se rishta? Agar koi apna na hokar bhi apna lage toh usse kya kehte hain?" [What is the relationship with Nandu? If someone is bound to you in spite of not being related to you, what do you call that?] The rich emotional detail makes Amar Prem gripping.