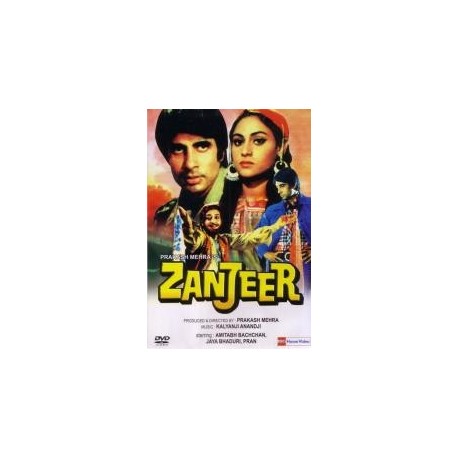 Zanjeer - The Chain - Its unbreakable and very old - 20 years old - and each day, each night and every minute of Vijay's(Amitabh Bachchan) life have become its links - these links encircle his brain like the grip of a snake. Vijay's father had gone astray. And when he wanted to rreform his way - he & his wife were cold bloodedly murdered before the eyes of his son. Years pass and vijay grows up under the care of a police officer. Vijay also grows up to be a police officer. Sher Khan(Pran) runs gambling dens in the area under charge of Vijay. Sher Khan & Vijay meet like bloodthirsty enemies, but turn into lifelong friends - Sher Khan shuts down all his gambling dens. Incidents of deaths due to illicit liquor were constantly worrying the authorities. Inspite of their best efforts, the police were still unable to trace the culprits. One day, Vijay intercepts a truck loaded with illicit liquor, and his bid to escape, the driver kills several pedestrians, and abandoning the truck runs away. The only witness to the driver's identity is Mala(Jaya Bhaduri). Mala's testimony leads to teja(Ajit) who on being unsuccessful in bribing Vijay, has him imprisoned in a bribery case. Will Vijay break down all barriers that now stand between himself and Teja. Zanjeer - considered Amitabh's breakthrough film, is also one of his best films.