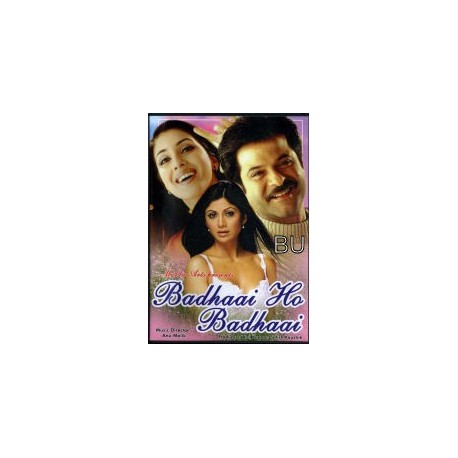 Roly-poly director Satish Kaushik is trying to tickle a few funny bones in his next comic caper Badhai Ho Badhai. The film, starring Anil Kapoor, Shilpa Shetty and Kirti Reddy in the main roles, is a lighthearted family drama that takes a comic look at the institution of marriage. The story revolves around two families the Chaddha family (played by Amish Puri and Farida Jalal) and the D Souza family (played by K. Vishvanath and Rohini Hatangadi). There is a constant feud between the two families with Chaddhas and DSouzas always having their differences over almost every issue. After 25 years of not seeing eye-to-eye the families receive a strange letter from somebody called Raja (Anil Kapoor) claming to be their grandchild. This astounds both the families, as Raja becomes the common link between the two families. Thats why when Raja enters their lives he is met with complete denial. However, he shacks up with Ghooman Singh (Kader Khan), a cacophonous singer. Soon Raja begins cajoling his grandparents and wins their acceptance. In return his grandparents begin pressurizing him to marry. In return Raja too crop up a lie that he is already married to a Punjabi girl, Banto Betty (Shilpa Shetty). On the other hand, there is also in the picture a modern and sensuous girl Florence (Kirti Reddy). Raja too gets a shock out of blues when suddenly Banto Betty makes an entry into the family without his knowledge. However, the bitter truth is that Raja is in love with someone else. How Raja gets out of this quandary and also reunites the feuding Chaddha and DSouza family is what the rest of the film is all about