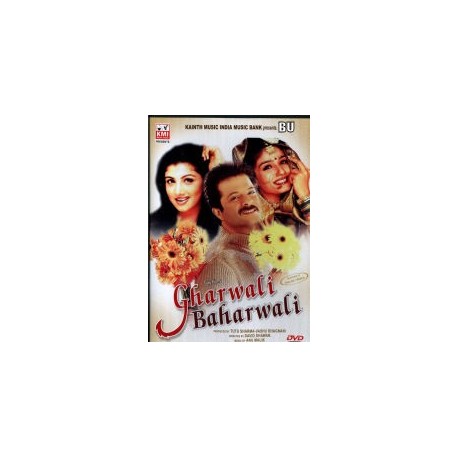 Gharwali Baharwali is a story of Arun Verma (Anil Kapoor) and Kaajal (Raveen Tandon), who are happily married but have no offspring. Arun's father (Kader Khan) dreams of having grandchildren. After he takes a heart attack Arun agrees to marry again to continue the family line. During a business trip to Nepal Arun meets a village girl Manisha (Rambha). due to unavoidable circumstances he ends up marrying her. He returns to India promising that he will come back for her. At home, during Arun's absence Kaajal's affection and caring makers her father-in-law changehis mind and not insist on a second marriage. Seeing his father change, Arun is unable to tell them of his marriage to Manisha. Kaajal plans to adopt a child but she is unsuccessful. Meanwhile, Manisha calles from Nepal and announces that she is going to have Arun's baby. Arun and his friend Jumbo (Satish Kaushik) make arrangements so that Kaajal ends up adopting Manisha's baby. Events lead to Kaajal meeting Manisha and asks her to move into the house as a live in babysitter. Kaajal is puzzled to see the similarities between the boy and Arun, and his fondness of Manisha. The love triangle causes and emotional rollercoaster. Kaajal's suspicions lead her to discovering the truth, and she confronts Arun to choose between her and Manisha... Who does Arun choose? Is Kaajal able to keep her adopted son?