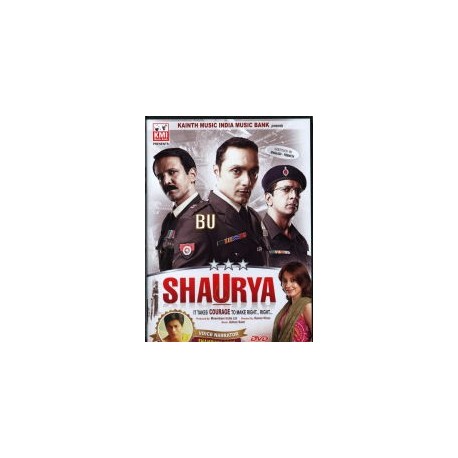 A story of justice, honour, faith and above all believing in yourself A story of finding courage within... where friendships are tested in the battle that matters the most... The battle for truth and justice... Shaurya is the story of Javed... a man wronged by his country by the very men who he fought with and were his friends. It's the story of Siddhant, whose only aim in life was to escape reality and wasn't ready for what life brought him. It's the story of Kaavya who never understood why it was difficult to speak the truth. It's the story of Aakash for whom living the rules was the only way to live life. And it's the story of Brigadier Pratap, a man who lived by his own rules even if they were against humanity. Captain Javed Khan charged with mutiny, treason and killing a fellow officer. Even when he is held for court martial, he refuses to speak in his defence, as the secret he holds is too powerful for the establishment to handle. Assigned for this task are Sid and Aakash two best friends, lawyers and very ambitious individuals who have contrasting views on life. Nevertheless, this one case will change their lives forever. The case takes them to Srinagar. While Aakash, for whom winning the case matters the most, follows the blueprint, Sid discovers a new meaning in life, Kaavya, Javed and of course the man in question, Brigadier Pratap all