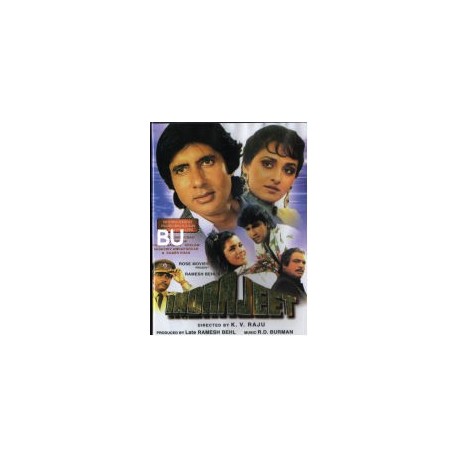 "INDRAJEET" is the story of a dutiful Police Officer and a very noble humanbeing, who spent all his life for the cause of the poor and getting justice for them. In performing his duties, he even got separated from his love.

"INDRAJEET" (Amitabh Bachchan) and Shanti (Jaya Prada) were in love. They were going to get married, but fate took a different turn, Indrajeet had to arrest Shanti's father Seth Din Dayal (Saeed Jaffery) for abetting the murder of Union Leader Chandu (Suresh Chatwal). Shanti was unaware of her father's involvement in black deeds, so she got her father released through the recommendations of a Minister Sadachari (Kadar Khan), who is a family friend. This irked Indrajeet and he did not hesitate to choose the path of seperation and sacrificed his life's happiness for the sake of his duty.

Now Indrajeet has got only one purpose in life, to bring up Union Leader Chandu's daughter Neelu (Neelam). His aim is to make her a perfect, nice human being. As Neelu grew up, she fell in love with Vijay (Kumar Gaurav), a lovable, decent young boy. Indrajeet got impressed by him and arranged their marriage.

Neelu and Vijay were happy, but suddenly the evil elements of society attacked them when they had gone for their honeymoon. Vijay lost his life while trying to save the honour of Neelu. And Neelu also breathed her last in Indrajeet's lap. Indrajeet got shaken up. His dreams were shattered. He banged the doors of law and justice, to book the culprits who were responsible for the death of his daughter and son-in-law. But, his voice could not find its way to the deaf ears of corrupt Minister Sadachari and Police Commissioner, the dishonest Sham Sunder (Sadashiv Amrapurkar).
Is Indrajeet's voice finally heard? Is he able to get justice? To know all these, see "INDRAJEET"