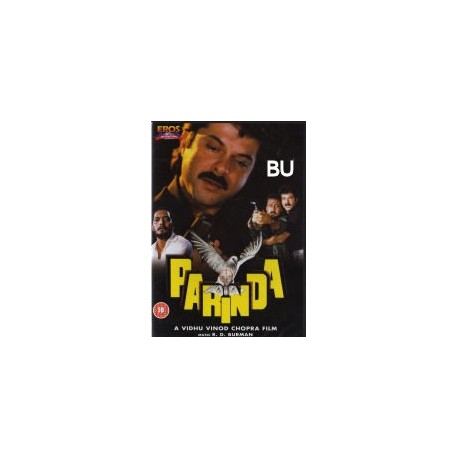 Parinda is about two brothers left to fend for themselves in the brutal city of Bombay. Kishan(Jackie Shroff), the elder brother, is forced to join Anna(Nana Patekar), an Underworld don, to sponsor younger brother karan's(Anil Kapoor) education in USA. Back from America, Karan who is not aware of his brother's profession, witnesses the murder of friend Prakash(anupam Kher), an honest police officer. Prakash is shot by Anna's hitmen and dies in Karans arms. Paro(madhuri Dixit) is extremely disturbed by brother Prakash's murder. Her state of mind , and Karans desire to revenge his friend's death take Karan into the underworld, where he discovers the other side of his brother's life. Karan is caught in a dilemma between revenging Prakash's deatch and guarding Kishan's interests. Parinda revolves round relationships and the strain they are put under in strange circumstances. The tenderness of the relationship between Kishan and Karan as well as Karan and Paro holds firm despite a general environment of tension & violence. Parinda is a story about the hunted, the victims of violence. Parinda is a story about the hunted, the victims of violence who are forced by circumstances to perpetuate the same. The message it seeks to give is that violence does no lead you anywhere. It only destroys.